An envelope containing a few service and discharge documents fill in some dates of when and where Walt served in the Army up to 1947. An odd bunch of documents that Walt and Ruth would have had to hold up to a mirror to read, they look like they might be photos of film negatives—in reverse. I’m guessing it had something to do with how the Army was storing the glut of documents it must have had during the war. Today, it’s easy to scan the documents and flip them to be able to read them, but here’s an idea of what the originals look like:

There are two honorable discharge documents, one from 1943 and the second from 1947. They suggest that Walt had to be discharged in September 1943 (perhaps at the end of his flight training?), and then reenlist in October 1943 to begin another stage of training (I’m guessing here). Altogether, Walt served from 12 January 1942 to 7 January 1947. Here are the discharge documents: 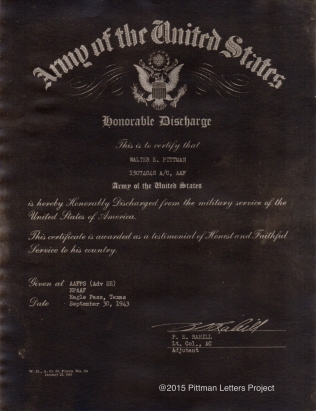 There are two additional documents, an enlisted record dated 30 September 1943 and a separation document that also entails the particulars of his service. That document doesn’t appear to have a date other then his official date of separation of 7 January 1947 :

From the enlisted record, we learn that Walt received training in 1943 from March through September at San Antonio, TX, Oklahoma City, OK, Winfield, KS, and Eagle Pass, TX.

One more document, in a different envelope, shows that Walt didn’t stay out of the service very long. He completed an Air Force Aircraft Controllers Course in July 1949 at Tyndall Air Force Base, Panama City, FL: