The nine letters of May 1945 have been transcribed. Mostly Walt talks about whether to stay in combat and wait for that elusive promotion to Captain or come home, now that he has over 300 combat hours. It’s an increasingly difficult choice when he sees his friends both getting promotions and going home.

The nine letters from April 1945 see Christmas gifts from home finally reaching the Philippines on the 15th, just as the rainy season is about to begin. Walt reaches 300+ combat hours, and wonders if he should stick out waiting for a promotion to Captain or come home—he makes it sound like it’s his choice. Even though he hasn’t received his promotion yet, he receives the Air Medal and the Distinguished Flying Cross following his being shot down in January.

I’ve posted a photo of Walt’s Air Medal before, along with the Purple Heart, but I don’t have his Distinguished Flying Cross. It has gone missing somewhere over the years. I have replicas of all the medals, given out by some organization very late in Ruth’s life, but she refused to attend that ceremony for her own reasons, so I’m not going to show the replica of the DFC. 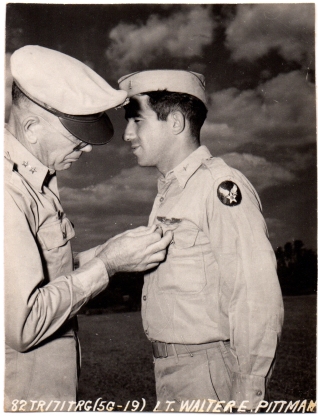 The March 1945 letters are finished. During March, Walt reveals that he has 270 combat hours in and that he expects to have as many as 400 by the time his tour is finished. He has been made the C Flight Leader and hopes to be a Captain soon. On the 23rd, he sends some interesting photos of the homemade squadron bar, where he obviously spends a good amount of time.

It’s been almost a year since he’s seen Ruth, but he’s hoping the time will go fast until he can return home.

I never mentioned it when it started happening, because I guess I thought it was a fluke, but I wonder why Walt quit numbering his pages. It had been such a habit throughout 1942 that I thought it would never end. Is it easier for me to center the text for a page number or to write the bracketed unnumbered page? I go back and forth on that question.

There aren’t many letters in these first two months of 1945, but they contain a lot of interesting information. In January, Walt is shot down and spends a few days in a raft before being rescued. He goes on a 10 day leave to Sydney in February, which eats up most of the month. He learns of his promotion to 1st Lt. while he is on leave.

I added two letters to the 1951 list of letters from Korea: 26 April and 19 May. Walt writes to his four-year-old son, Sib, about eating right, not playing in the street, and just generally being good. Happy Father’s Day.