This letter offers more information that it is among the first letters sent home. It recounts Walt being examined, fingerprinted, sworn in, and inoculated as a new soldier.

Walt mentions seeing a movie, Babes on Broadway (1941), the first of many references to the popular culture of the period.

You can see below that the scanned letter included a little 3″ x 4″ souvenir mailbag from Fort Hayes. It contains these stock army images on little cards: 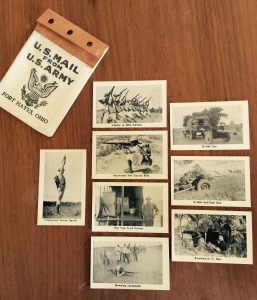 Pretty much, this is a letter about waiting around and getting ready for something to happen. As you probably know, the attack on Pearl Harbor happened in December of 1941, just a little over a month before all these soldiers are going through enlistment procedures, so there is a lot of uncertainty about when and how they would enter the war.

A transcript follows the letter images.

I was going to say How are you?—but you can’t write me yet so I hope your O.K.—I am fine-but a little lonely.

Just as I finished your letter yesterday they called us for Physical exams—I passed.

Sun. nite—yesterday—Three of us fellows went into Columbus—ate a ham (illegible cross-out) and coffee—went to “Babes on Broadway and back to the Fort at 11:00.

We were fingerprinted this morning and will probably be sworn in sometime today.

I will be sent somewhere (I don’t know know yet)—for 13 wks. training, then from there to wherever they assign me.

I (illegible cross-out) miss you a lot Ruth, some times I almost wish I hadn’t enlisted, but I think of better times to come. It will be better when I reach a destination,—then I will be able to here from you.—Funny talk for a Soldier,—Unh? How do you like that Unh? I don’t know where it came from—just poped up.

I am anxious to get that picture of yours, but I guess I will have to wait.

Hope your Mother, Father—Ruby—Grandmother are O.K.

I have just been sworn in as a soldier—I am now a soldier—can you imagine that. [pointing to the word imagine: I can’t think how to spell it.]  [written above sentence: I just remembered]

Thanks, I knew you could.

We will probably get our uniforms tomorrow—:

Guess I’ll have to buy a pencil everybody wants to use this pen and it is running out of ink.

I didn’t go out to-night as I hear we have to get up at 4:00 as there is a shipment of soldiers going out. Some to Texas—Some to Mississippi.

We recieved our uniforms today. I haven’t decided how I look as I need a shave. We also got a “shot” in each arm for typhoid and a vaccination.—Arm is kind of sore. Ha,

We are just sitting around now waiting for something to do—some of the boys feel a little ill from the “shot” in the right arm.—otherwise everybody is O.K. and is anxious to “get on the move.”

I am sending some pictures of the Fort.—(I think that is what they are—I didn’t look at them.

I think that I will sign off.—Wishing I were there or you were here.